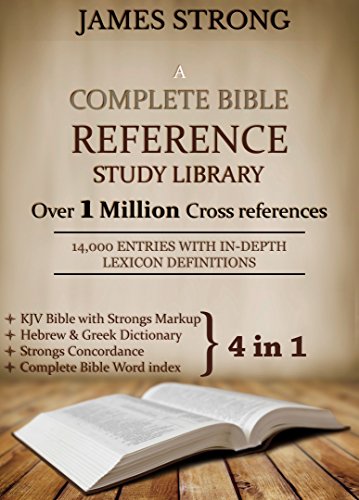 King James Bible is its most famous translation. Translated by 47 scholars and completed in 1611, the King James Bible was the most influential book in the world. This Bible containing the Old and New Testaments Translated out of the Original Tongues and with the Former Translations Diligently Compared & Revised Set forth in 1611 and commonly known as the King James Version.

In this edition, we created concordance for each and every strongs numbers which are cross referenced in the bible, each strong no. having one or more important headwords, from there each headword having corresponding more bible verse links cross referenced to the bible (MORE THAN 1 MILLION LINKS).

All the original words are treated in their alphabetical Hebrew order, and are numbered regularly from the first to the last, each being known throughout by its appropriate number. This renders reference easy without recourse to the Hebrew characters and Immediately after each word is given its exact equivalent in English letters, according to the system of transliteration laid down in the scheme here following, which is substantially that adopted in the Common English Version, only more consistently and uniformly carried out; so that the word could be readily be turned back again into Hebrew from the form thus given it.

Every word of the Bible is directly linked to the Hebrew and Greek dictionaries and at the end of dictionary entry link have been created for Hebrew & Greek Concordance so reader can get in-depth meaning for the particular word.

In this Edition we newly created "bible word index" its contains all the bible words are arranged in alphabetical order, those words are cross referenced to strongs dictionary. It’s very easy to use and even if the reader don’t need to know about Hebrew & Greek Scripts, they can easily access this dictionary using common bible word index.