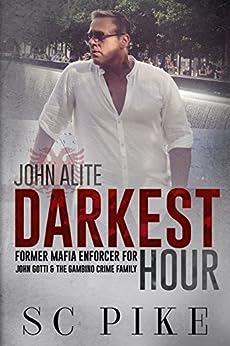 A New #1 Bestseller by SC Pike (True Crime)
TRUE-LIFE story of notorious Mafia hitman for the Gotti & Gambino crime family in New York City in the 80’s & 90’s. SC Pike brings John Alite’s story to life in such a way, the reader will feel as if they are walking in his very shoes!

TWENTY PLUS years and counting… John Gotti, Jr. (a shelved mafia don) has been seemingly obsessed with creating constant public feuds by harassing, fabricating lies on his own websites and social media, and altering court documents in a relentless pursuit to defame John Alite’s character in order to stop John Alite from telling the truth to the world.

John offers an honest, real first-hand, street level, no-holds-bar of his life, starting from a young boy, and then how he moved into organized crime with the Gotti and Gambino crime families.

*~*~*
John Alite had too many darkest hours to count, but he’s pushed through them all with a spirited perseverance, tenacity of mind, and a strength of purpose. Just like everything else in his life, he’s met adversity head on with fierce determination and a resoluteness to come out on top.

A college baseball scholarship was his way out of the inner city, but his dreams of going pro were crushed by an arm injury.

John Alite was forced to return home to the only life he knew, where having to live on the streets of New York meant one thing–learning how to survive.

He was driven.
He was extreme.
He was feared.
But most of all, he was loyal.

From a young age, he found himself influenced by the wrong crowd. Enticed by the wealth, power, and prestige of the mafia, he immersed himself in a world that was foreign to most. A society where policies were enforced by instilling fear.

Those at the top were about obtaining and harnessing absolute power, while covertly using their own warped codes of ethics. Honor and loyalty were merely a misnomer. The cold, bitter truth was, he was expendable, and his sworn allegiance was rewarded with betrayal.

On the run and unable to trust anyone, John was finally forced to confront his own demon–himself. Facing the harsh realities of who he was and what he had done wasn’t pretty, and he had some serious, life-altering decisions to make. Ones that would come with a price.

Through a life of heartache, betrayal, and loss comes a story of grace, healing, and redemption.

Book one of Series:
Note: S.C. Pike has written John Alite’s biography, starting with his childhood, going into his teenage years, and then into adulthood. All the transformations and events within his life have been documented with precision, and are true accounts of how John Alite found himself involved within organized Crime. Mainly with the New York Mafia, (also known as Cosa Nostra), Gang members, and mob affiliates. Drugs and Violence.

*~*~*
John Alite and S.C. Pike have a common goal, a message to the world, one they wanted to convey within the Darkest Hour Series. They hope to inspire those of all ages, who are struggling in life, to persevere, and to never give up or give in to a life of crime, no matter the circumstances one finds themselves in.

The How to Make Money in Stocks Complete Investing System: Your Ultimate Guide to Winning in Good Times and Bad