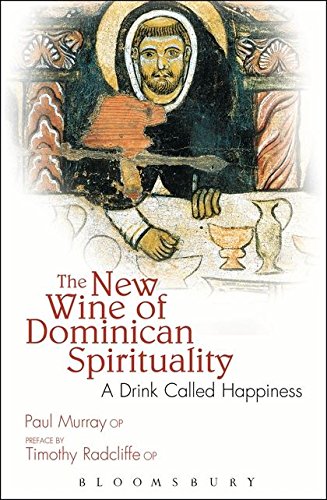 The New Wine of Dominican Spirituality: A Drink Called Happiness

This lively and compelling book by Paul Murray OP names and celebrates aspects of the Dominican tradition which are at the very core of its spirituality. This tradition has often been described in the past, and for good reason, as scholarly and intellectual. But the lives of the Dominicans whose voices we hear in this book were also, and to an extraordinary degree, apostolic, exuberant, evangelical, risk-taking, mystical, and robust.

One of the things which has characterized the Dominican spirit from the beginning is a sense of openness to the world. Dominicans such as Thomas Aquinas, Jordan of Saxony, and Catherine of Siena, were not only impressive celebrants of grace. They were also defenders of nature. After the example of St Dominic himself, they learned to drink deep from the wine of God’s Word, and became witnesses not only of certain great moral and doctrinal truths but witnesses also of an unimaginable joy.

One reason, in society today, why so many feel unfulfilled and are not happy is because the vision of life offered is one that is restricted to a pragmatic, one-dimensional view of the world. The Dominican vision of life we find presented in this book is one that is truly broad and joyous. It is a path of spirituality – a way – open to people of all kinds and conditions.